My first trip to Festival OBOE was in 2009 where I recorded three concerts. One year later I documented the 10th instance of the event. Eight concerts at five locations, the Cathédrale Americaine, the subterranean Auditorium de la Cité des Arts, the glass enclosed Conservatoire du Centre at Les Halles, Bateau Daphné on the Seine and the venerable Schola Cantorum. And in 2012 I added video to the mix. Check out this clip from the Dhun in raag Bhairavi featuring Sanjeev & Ashwani Shankar (shennai), Anand Shankar (tabla) and Alain Lutic (surshehnai), performed at the Centre Mandapa.

In the meantime I have explored other options as well, a golf caddy for medium sized gigs (housing the microphone stands and cables) and even a large aluminum suitcase that I just had retrofitted with high duty wheels to be able to take the strain. Bottom line: It is possible to realise amazing, award winning audio and video productions* while protecting the environment.

(* Goldener Bobby 2014 for a recording with Quatuor BRAC) 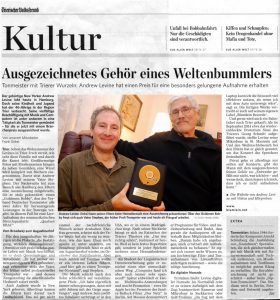 Welcome to the new website of blumlein records – mobile recording! Due to the necessity to implement the GDPR we are in the process of overhauling our online offerings. In the meantime feel free to contact Andrew if you are in need of a high quality audio or audio-visual recording. We are always at your service!